When Lee Middleton met Beccy in a friend’s kitchen, after she had cut their hair, he knew he had met his girl, but not that one day he would design and name their family’s luxury stables in honour of their love, Beckley Stud.

This young couple quickly developed a strong work ethic, with Lee working as a horse dentist whose client list included Piggy French and Oliver Townend. They had a son and Beccy juggled freelance hairdressing around being a new mother at 20.

Like many entrepreneurs, Lee is dyslexic and there is no doubt this helped him to join the dots that many others would not have seen. After learning about air jackets being used for motorbike racing, he was inspired to see if it could work for horse riders.

Speaking to manufacturers, he started to design and develop an air jacket for equestrians. Bringing new ideas into the traditional equestrian industry was a challenge that many would have not persevered with. Lee’s tenacity paid off and ‘Point Two Air Jackets’ remain the only air jacket to have passed the rigorous standards and testing set by British Eventing and carried out by the Transport Research Laboratory (TRL).

Lee said: “I knew I was bringing something very important to market, but I owe the motivation to keep going through this time to the support I gained from the riders in the beginning. It was Oliver Townend who gave me my big break when he had a rotational fall at Rolex in 2010, wearing one of our air jackets. After this we rode a PR dream for the business, but it felt so purposeful to have saved many top names such as Paul Tapner and Laura Collett from life changing injuries (or worse) due to them wearing their Point Two air jackets.”

The next step for the couple and their growing family was to hit America to launch the jackets, spending three years in Wellington, Florida, the riding capital of the World. The family built a dream coastal home and their two daughters learnt to figure skate.

Lee recalls:  “The American equestrian industry is very different and it was a lot easier to launch the product in the States. I was also able to find time to accompany Ollie, my son, on an eight-week farrier course. Ollie is similar to me, preferring to be more practical, rather than academic, and he was the youngest on the course. He won their top award, gaining his first clients including a famous show jumper worth £5 million as well as a range of grand prix and police horses.”

Lee flew around the globe with Point Two but, during a trip back to the UK, his father told him that he wanted to retire from the family business, Equine America UK Ltd, a horse supplements business that Lee’s parents had set up and run for almost 20 years, so that he could focus on his Racehorse training. Growing up around Equine America had given Lee a huge standing in business, and he was not prepared for that to leave the Middleton homestead, so purchased it from his parents.

Beccy said of their marriage: “Life changes quickly with Lee!  We sold up our home and left the US office up and running and moved back to the UK for the next chapter”. The couple took a plot of land and built Beckley Stud with the help of Scotts of Thrapston. They were able to create a bespoke stable block for their daughter’s ponies in order for them to progress in British Showjumping and represent their school in NSEA competitions.

The couple worked in tandem with Scotts to design a bespoke ‘C’ shape yard to include all they desired; washdown & solarium area, beautifully equipped tack room, feed room and barn with sliding doors, toilet and a day room for staff, all overlooking their arena and horses paddocks. 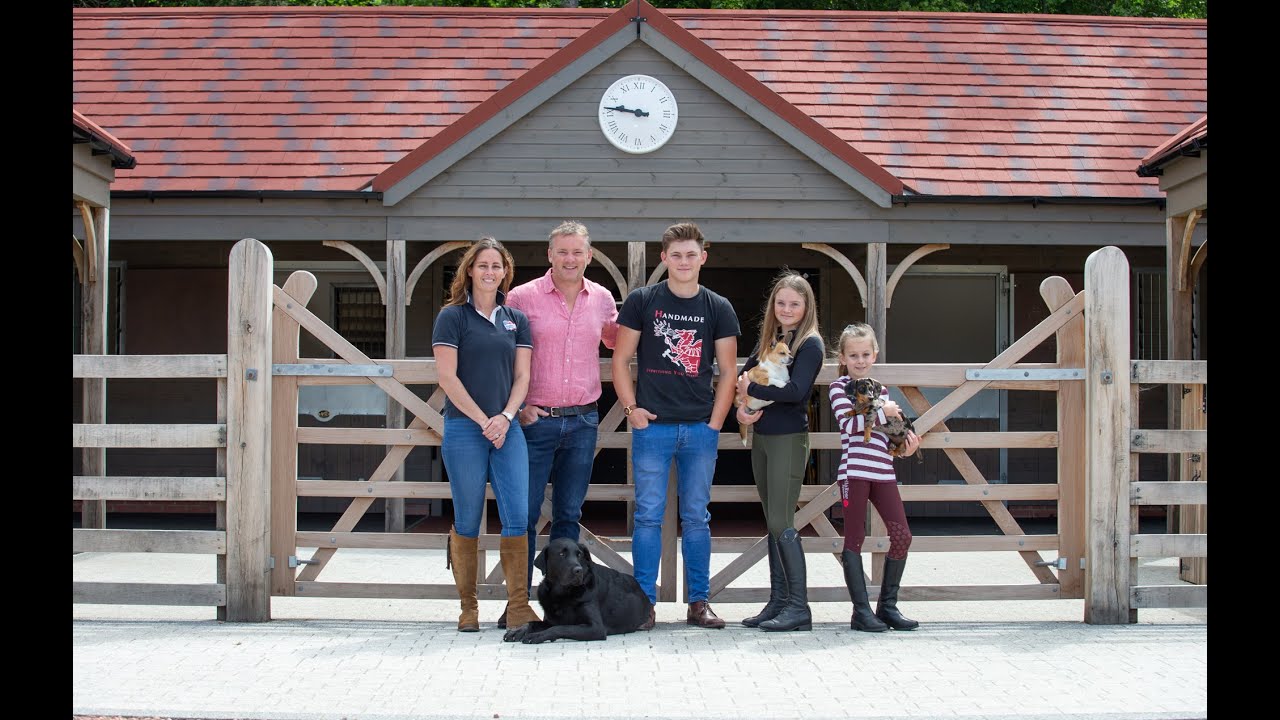 Lee commented “We knew that Scotts stables had a great reputation as the ‘Rolex’ of the stabling world, so we initially started a conversation with them, on their stand, at Burghley Horse Trials.  Ultimately, we chose Scotts to build our new yard due to their design expertise and flexibility along with the product quality. And, knowing that Scotts has been in business for 100 years gave us additional confidence in selecting and working with them on this bespoke project.”

Now settled back in Sussex, Lee has already made significant changes in the family business such as moving all the manufacturing of the products to the UK which allows the company to comply to quality assurance schemes UFAS & BETA NOPS. He comments: “We have brought on board world-leading equine nutritionist Deborah Leabeater and all our products are manufactured in food industry standard factories, using only the freshest, most innovative and effective ingredients available from approved suppliers.”

Lee has also used his PR skills to forge relationships with top riders who had been ordering and faithfully using Equine America for years. John Whitaker’s wife had been unassumingly putting in regular orders until Lee answered the phone to her. He jumped on the opportunity to capitalise on this brand kudos that was hidden behind the order books.

Lee said “I feel the role has been reversed for the Equine America story, with Point Two the riders took a gamble on me, which I will be forever grateful. But with the supplements I am uncovering a wealth of riders who have been quietly using our supplements, and I want to return their support. We have selected brand ambassadors from the elite to grass roots with the aim of helping them realise their ambitions.”

When we caught up with Lee and Beccy at their newly built Scotts yard, they were doing just that. We found them in the midst of preparing to host Equine America’s ambassadors in the International Arena at Hickstead, which they had privately hired for an ultimate training experience during lockdown, and a replacement to attending events this summer.

It is clear that Lee and Beccy know what they want and go and get it. We are very glad they chose to work with us at Scotts to build their bespoke stables as a base to restart their new UK life. We will be watching this space!